Celebrity Jersey Cards is a weekly series in which I create virtual trading cards for jersey-clad celebrities.  Today, we continue working our way alphabetically through Major Leaue Baseball.

Hasn't Chuck Norris pretty much done everything?  Seriously, the guy even has a Facebook meme dedictaed to him.  Born in Ryan, OK, the Texas Rangers were the closest baseball team to him growing up.  Coincidentally, he would later star in Walker, Texas Ranger.  Of course, his biggest accomplishment is appearing on a Celebrity Jersey Card!  Of course, at the time of this card, the Rangers were still the Washington Senators, but Norris can do what he wants. 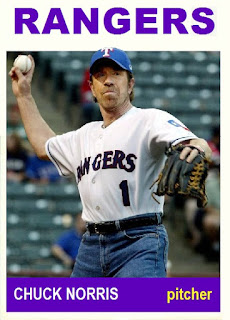 Golfer Jason Dufner is a native of Cleveland, OH.  He has won one major championship and is a four time winner on the PGA tour.  His laid-back mannerisms have lead to the term "Dufnering," although he appears a bit animated on his Celebrity Jersey Card. 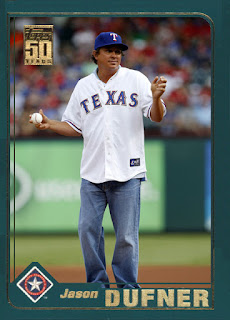