Wizard World is always a great comic con for meeting celebrities.  It's also a great place for spending fun time with friends.  Today's Friendly Encounters is a little of both.
I actually met Gabe Baron several years ago at Wizard World, when he was promoting the debut of Resistance Pro Wrestling, a new independent wrestling company he started with his brother Jacques.  Over the years, I have had many laughs with Gabe, as we discussed 1970's television sitcoms, sushi, wrestling and any other similar serious nonsense.  I'm proud to know Gabe and even prouder to be his friend.  He's just a really good person.
This year, Gabe was once again at Wizard World with Jacques.  They were running their booth full of all sorts of pop culture items (movie posters, figures, etc.)  Of course, I spent some quality time hanging around that booth.
This year, Kato Kaelin was the Celebrity "Host" of Wizard World and it wasn't just an honorary position.  Kaelin worked it all weekend and the crowd loved him.
While talking to Gabe, he mentioned he had not seen Kaelin.  That was all I needed to hear.  I dragged him out to the lobby, but Kaelin was on break.  Gabe went back to his booth and I went about my business, too.  A little while later, I saw Kaelin back in action so I beelined back to grab Gabe.
Once we got out in the lobby, the fun really began.  Kaelin, who was familiar with me from earlier interactions, posed for the pic with Gabe, but then chided me repeatedly for not using the flash for Gabe's picture.  Finally, he took my phone and set up the flash himself!  I took the pic and everyone was happy, especially Kaelin (although I have to say, in my defense, the pictures with or without the flash weren't much different).  Either way, the encounter was extra fun.
My coverage of Wizard World will continue here tomorrow.  The next Wizard World will be in Madison, WI.  Check WizardWorld.com for all of the details and for a full listing of all of their events. 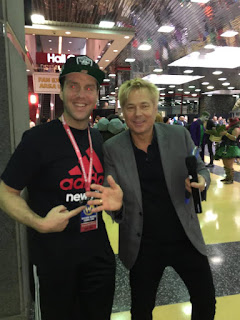