ChrisDell Harris and the Chicago Bliss

The Chicago Bliss went 4-0 this season.  Unfortunately, they lost 14-6 to the Atlanta Steam in the conference championship.  The Steam is certainly deserves all due credit, but what happened to the Bliss and where do they go from here?
The first part of the question is easy.  They were beaten by a team that played the better game on that day.  If the game was played again, the result could easily have been different.
The Bliss held the powerful Steam offense to 14 points.  If you would have told me the Bliss would only give up 14 points, I would have predicted a big win.
That points the finger at the offense.  During the regular season, the Bliss outscored their opponents 63.3-8.3.  Quarterback Jayne Caldwell only threw for 38.3%, but she did have 13 TD's.  Besides, the Bliss offense never relied on a big air game, even duribng the Heather Furr years.
This loss basically comes down to a well-fought game, where Atlanta was the better team that day.  Nobody would have predicted the Bliss being held to 6 points.
Where the Bliss goes from here is the same place they always go.  The Bliss coaches are the best prepared coaches in the LFL, perhaps all of sports.  Coach Hac's motto of "ABR-Always Be Recruiting" has worked well in the past.  Stars retire and young players fill the gap.  One loss, even in the championship game, doesn;t change the mindset which has worked so well for the Bliss over the last several years.
Since my first season covering the Bliss, veteran stars Yashi Rice, Deena Fagiano and Heather Furr already had retired.  Kim Perez and Dominique Collins have announced that they are retiring.  That leaves only ChrisDell Harris and Alli Alberts (who returned after a one year hiatus) as the Veterans remaining from 2013.
Harris ranked third on the team in rushing, behind QB Caldwell and Javell Thompson.  The Ferrari has been an elite player throughout her career, but might this have been her last game?
I'm sure Coach Hac is already working on next season.  With or without Harris, the Bliss will be prepared.  That's the Hac way.  That's the Bliss way.
While the game may have been a disappointment, the Bliss has no reason to hang their heads.  They have been the elite team in the LFL for years and despite the loss, they will go into next season as one of the favorites again.
Congratulations to Coach Hac and the Bliss.  You've done Chicago proud once again! 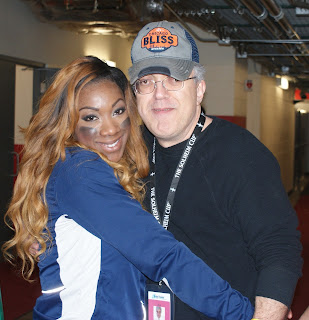