Born in Orange, NJ, Roy Scheider was an amateur boxer, before turning to acting.  He rose to fame as Captain Martin Brody in Jaws.  His Celebrity Jersey Card comes from his role in Tiger Town, the first television film produced for the Disney Channel.  It featured Scheider as an aging member of the Detroit Tigers.  Ironically, Scheider also appeared in Paper Lion, but in an uncredited role.  Could there be a Celebrity Jersey Card of Scheider as a Lion? 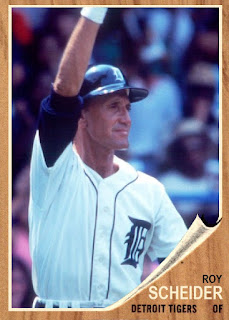 Actor J.K. Simmons was born in Grosse Pointe, MI.  He was carving out a solid career, when he landed a role in Law & Order: Special Victims Unit, eventually appearing on three of the four series in the franchise.  Simmons is an avid fan of the Detroit Tigers and even appeared as their manager in For The Love of the Game.  He earned his Celebrity Jersey Card while throwing out the first pitch on Opening Day in 2015.  Also, he is the voice of the yellow peanut M&M on the commercials since the late 1990's, 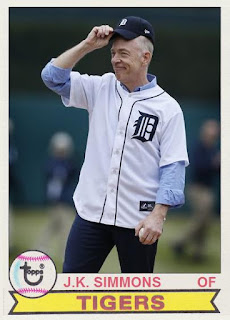