I have crossed paths with Glen Rylko many times and we became friends through our times at Resistance Pro.  Glen and I have similar interests with celebrities and wrestling.
I have met hundreds of stars, but Glen has me beat on several, including George Wendt.  Glen met the legendary Chicago actor last May.
I would love to see Glen's collection.  He has posted many pieces on social media.  I love the old wrestling promo cards and the old score books.  Glen has a keen eye and an appreciation for the cool things (aka stuff I like).
As we head into the spring and convention season, I am sure I will run into Glen at several conventions.  He'll probably beat me to a few more celebs, too.  For right now, Wendt is my biggest miss from his impressive list. 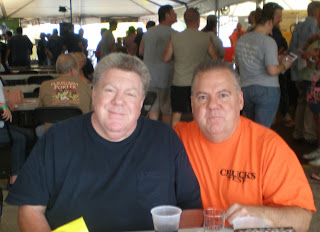