Celebrity Jersey Cards is a weekly feature in which I create trading cards for celebrities spotted wearing jerseys.  The Chicago Cubs are out of the playoffs and therefore it's time to focus on football and the Bears.

Goalie Corey Crawford was selected by the Chicago Blackhawks in the 2003 NHL Draft.  He made his NHL debut in the 2005-06 season, but was here to stay midway through 2009-10.  He is a 2x Stanley Cup champion and a 2x All-Star.  Now he can add a Celebrity Jersey Card to his awards. 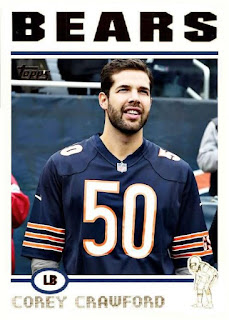 Center Andrew Desjardins was undrafted, but has played in the NHL since the 2010-11 season.  He started with the San Jose Sharks, but joined the Chicago Blackhawks in the 2014-15 season, just in time to win a Stanley Cup.  During the latest offseason, he signed with the German League.  I love that he is taking a selfie on his Celebrity Jersey Card. 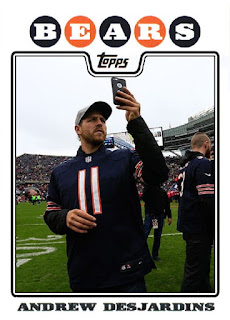