Friendly Encounters is a regular series featuring friends who have met celebrities.

This is one of the most unique Friendly Encounters and probably the most profitable one for a friend.  You can watch the actual meeting on YouTube at Amanda Ruller's Big Win.
I know Amanda from the Legends Football League.  She is quite an athlete and definitely an interesting person.  She is also a Game Day Host for the Saskatchewan Roughriders in her native Canada.  She recently did a Johngy promo, which you can find in the column on the left.
Last year, intending to get tickets to Ellen, she ended up with tickets for The Price Is Right.  That turned out to be a bit of good luck.
Her luck continued (or was it skill?) when she was called up on stage as a contestant.  It got even better when her bid of $1 was the winner and she advanced to play the game "Dice Game."
Spoiler alert...she won the car.  She had to roll the dice for 4 numbers.  Thanks to lucky rolls, three numbers ended up being locks.  She really only had to pick one number correctly and she did it!
Her luck continued as she advanced to the Showcase Showdown after spinning the big wheel.  That was a bit of a challenge for the 5 foot Amanda, but she used her athleticism and spun it to victory.
Her luck ended when she overbid on her showcase.  I'm pretty sure she was happy though.
Due to the tax laws, she decided to take the monetary value, instead of having to pay taxes on the vehicle.  Still, she walked away with a nice amount.
Earlier, I questioned whether getting picked was a skill.  According to Amanda, there definitely is some skill to it.  In fact, Amanda reveals her suggestions on YouTube at How To Get On The Price Is Right.
Amanda is such a fun person.  You can learn more about her at AmandaBolic.com.  Also, make sure to follow Amanda on twitter 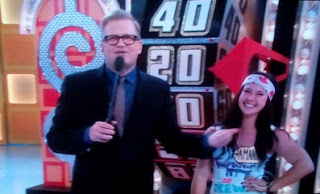 Drew Carey and Amanda Ruller in Los Angeles, CA-October 2014.
Posted by Johngy at 6:00 AM