Celebrity Jersey Cards is a regular series in which I create virtual trading cards for celebs wearing sports jerseys. Because it's cold in Chicago and the Blackhawks and Bulls are struggling, we need some sunshine from out west.

Carrlyn Bathe has been involved with the Los Angeles Kings for several years in many roles.  As an in-arena host, she entertained fans at the game.  Her work at Fox Sports has allowed her to entertain many more fans via television.  Of course, she is wearing a Kings sweater for her Celebrity Jersey Card. 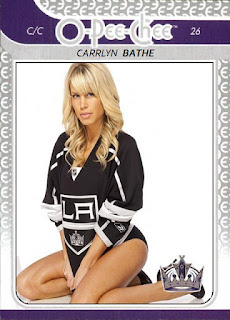 LaTrycee Fowler is a former member of the Los Angeles Kings Ice Crew.  She has since embarked on an acting career and has a few roles already on her resume.  She was also the National Spokesperson for the Tuskegee Airmen Scholarship Foundation.  For her Celebrity Jersey Card, she stayed loyal to her Kings! 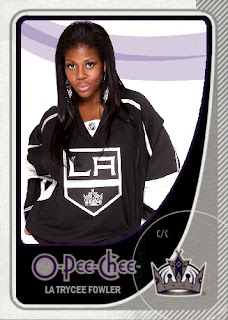