Professional golfer Natalie Gulbis was born in Sacramento, CA.  When she threw out a first pitch for her home area Oakland A's, Gulbis wore Rickey Henderson's #24.  She was once ranked #19 in the world.  Gulbis has also done some modeling, dabbled in acting and may have an interest in a public office in the future.  She does get extra points for wearing a glove on her Celebrity Jersey Card. 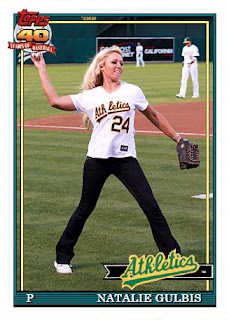 American figure skater Polina Edmunds was born in Santa Clara, CA and the home area Oakland A's invited her to thrown out a first pitch.  She competed in the 2014 Olympics and has won medals in a few other major skating championships.  Edmunds, who recently turned 20, is still active in figure skating.  She would get extra points for her Celebrity Jersey Card if she wore an official A's hat. 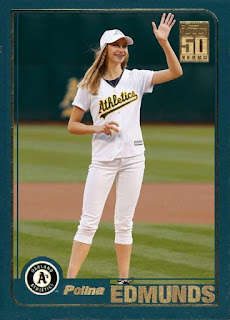