This Friendly Encounters is truly a Hall of Fame edition.  The photo was taken at the 2017 University of Tennessee Hall of Fame inductions of former Major League Baseball player Todd Helton and National Pro Fastpitch star pitcher Monica Abbott.  Obviously, both were standouts at Tennessee and both went on to Hall of Fame calibre pro careers.
Sandwiched by the two HOFers is Coach Michael Steuerwald, who is putting together a Hall of Fame career in the NPF.  Coach Stu has been a part of 5 NPF championship teams in the last 8 seasons.
I am proud to count Monica and Coach Stu as friends I have made through my coverage of the Chicago Bandits and the NPF.  Both are the best at what they do, but more importantly, both are quality people.
Coach Stu always has time for an interview or even just informal chatting.  Monica has always been great, too, despite being in constant demand by many media outlets.
Maybe someday, I will meet Helton to complete my association with all people pictured here.  I am sure this is a special picture for those involved, but it reminds me of how fortunate I am to not only know two of these people, but to have worked in the same environment as them.
The NPF has given me great opportunities and I appreciate all of it.  I also look forward to continuing doing what I love for my fifth season with the Bandits starting in a couple months.  Until then, you can check out ChicagoBandits.com to get updated news and info. 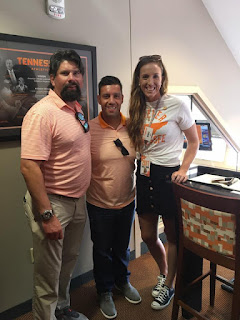 Todd Helton, Michael Steuerwald and Monica Abbott in Knoxville, TN-October 2017.
Posted by Johngy at 6:00 AM