Celebrity Jersey Cards is a weekly series in which I create virtual trading cards for celebrities seen wearing jerseys.  Today, I continue to work my way alphabetically through Major League Baseball.

Perhaps best known for his role as Danny Noonan in Caddyshack or as Fred, Jackie's husband on tv's Roseanne, Michael O'Keefe also starred in The Slugger's Wife, opposite of Rebecca DeMornay.  A signed 8x10 on Ebay provided the perfect picture for his Celebrity Jersey Card and it actually fits well with the feel of that set.  Once married to singer Bonnie Raitt, O'Keefe has kept busy acting and I hope to eventually see him at a comic con. 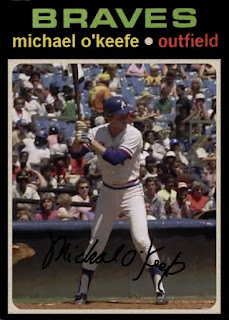 Martin Ritt played O'Keefe's manager in The Slugger's Wife, earning his Celebrity Jersey Card.  In the early 1950's, while acting, directing and producing, Ritt was caught up by the Red Scare and investigations of communist influence.  He worked in theatre, but did survive the mess and eventually made The Front, one of the first dramatic feature films about the blacklist.  Unfortunately, Ritt passed away in 1990. 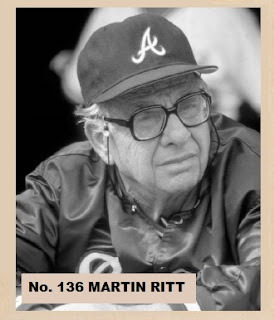