The "Or Else" Podcast: Episode 13: Kickball

The latest episode of The "Or Else" podcast is up on Soundcloud and it is jam-packed with stuff. In one short hour, we crammed in a wrestling event, a comic con , a kickball tournament and more.
Episode 13 starts with us talking about RPro's "Lights Out" event at Bourbon Street, a great place for wrestling. We follow that laughing about the fun we had at Wizard World 2013. We end it with more laughs about our experience playing kickball for charity (spoiler: one of us got a hit and scored!).
This episode is especially meaningful for me. It starts with wrestling, but ends with fun and friendships. Tommy Else, C Red, Barry Ryte and me are four guys who probably wouldn't have met, let alone become friends, without RPro. Within a couple years fo the debut of RPro, there we were participating in a charity kickball tournament.
The picture below says it all. (Sorry, Barry had left by that point.) The beautiful Chicago skyline is in the background, as we celebrate an amazing day. It may be cliche, the bonds made through RPro are strong and wonderful. In doing "The "Or Else" podcast, I get to relive these moments and remember how much fun I had. The six years flew by quickly and sometimes events are forgotten or blurred. With The "Or Else" podcast, they are coming alive for me and hopefully for the listeners who were part of this journey. This is Tommy's story at heart, but it's my story, too. It's the story for all who were part of RPro.
My little cousin Noah is another example. While he has only been to a few shows, he did some interviews for Johngy's Beat at those shows and at the RPro booth at Wizard World. That was always surreal to me. I grew up with his dad and to see Noah interact with the RPro talent was just so cool for me. I might be biased, but I always found his RPro interviews to be highly entertaining. The wrestlers always delivered in those interviews.
I hope the listeners are enjoying the ride. The feedback has been excellent so far. What started as a plan for a handful of episodes has grown into another great experience because of RPro.
Check out The "Or Else" podcast Episode 13: Kickball on Soundcloud. You can also listen to all of the episodes at The "Or Else" podcast main page on Soundcloud. 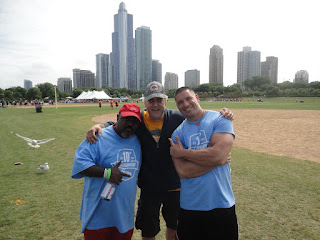