Hardcore Heather Owens doesn't look all that "hardcore" in this picture.  In fact, she looks rather giddy.  Then again, she is with the Godfather.  I'll let that sit there.
Heather is one of my favorite wrestlers at Resistance and one of my favorite people at Days of the Dead.  She looks small, but she is a ball of energy and fun.  She works hard and is well-loved at both places.
I have long-predicted a run as Women's champ at RPro and I still think it could happen in The Resistance.  She's been a loyal and popular worker for several years there/  Similarly at DotD, Heather (along with her her Zubaz-wearing husband Ed Gonzales) has been a tireless worked from the debut of the great con.
None of that stops her from having a fun time everywhere she goes.  That brings us back to the picture with The Godfather (aka Charles Wright).  When you're talking The Godfather, you are talking fun.
I love this picture.  It just screams fun.  This is the type of fun that is always happening at Days of the Dead.
Despite Heather having a great time with The Godfather, she did not join the infamous Hooooo train.  She remained a #ClassyBroad.  (She might kick my butt if I said anything different!)
Go to DaysoftheDead.com to get all of the info on this great horror con.  They have yearly events in five cities and you would definitely see Heather, although she might be a blur. 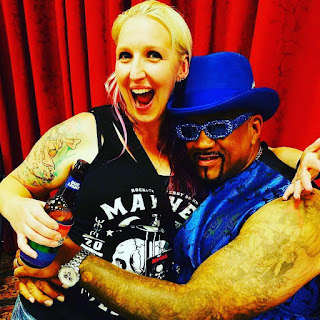 Hardcore Heather Owens and The Godfather in Indianapolis, IN-June 2017.
Posted by Johngy at 6:00 AM