Celebrity Jersey Cards is a weekly series in which I create virtual trading cards for celebrities wearing sports jerseys.  Today, I continue marching alphabetically through the Major League Baseball teams.

Manhattan born Henry Winkler rose to fame as "Fonzie" on tv's Happy Days.  The Fonz was about as big as it gets back in the day.  I remember him first from The Lords of Flatbush, which also starred Sylvester Stallone.  A bit ironically, Winkler was not in American Graffiti.  Winkler went on to have a hugely successful career as a producer and director.  A big softball fan, Winkler and the crew often played other teams for charity or fun.  Winkler's Celebrity Jersey Card comes from the Brewers celebrating Fonzie and the show.  On a side note, having met and talked to Winkler a few times, he is one of the nicest people I have ever met.  He truly is a class act. 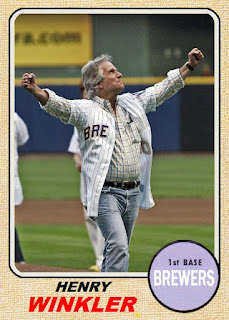 "Shortcake" to Winkler's Fonz, Erin Moran grew up and became famous on Happy Days.  Moran starred as Joanie Cunningham and even costarred with Scott Baio in Joanie Loves Chachi, a short-lived spinoff.  Joanie eventually married Chachi, to end the run of Happy Days.  Moran's Celebrity Jersey Card comes from the celebration at Miller Park.  Sadly, Moran died last year from stage four squamous cell carcinoma of the throat.  I also met Moran several times and she was so much fun.  She was very fan-friendly and even did a promo for me, which is in the far left column.  RIP Shortcake. 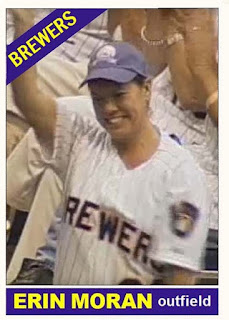