Friendly Encounters is a regular series in which I feature friends who have met celebrities.  Today, I continue highlighting my experiences at the Motor City Comic Con, by featuring my great friend and one of his screen favorites.
Jason joined me on a few trips to Novi for the MCCC.  He was more interested in the collectibles and the experience than meeting most of the celebrities.  One photo opportunity he did take was with Chewbacca.  (Shhh don't tell him that it wasn't the real Chewie, but a fan dressed as the famous Wookie).  Jason is a huge Star Wars fan and meeting anyone associated with the epic film is always fun for him.
Jason's experience with Chewie is just one example of the many great costumes the feans wear.  When I first started at these shows, people just wore costumes.  Now they are cosplayers and it is a huge part of any comic con.  I have previously written a few times about my search for Aquaman cosplayers at these shows.
The 2018 MCCC starts in a few days and I am certain there will be a few Chewbacca cosplayers, along with many other characters from comic books, movies, tv and more.  I will not be cosplaying, but I will be "On the Beat" as always.  Check out MotorCityComicCon.com for more info on this fun event. 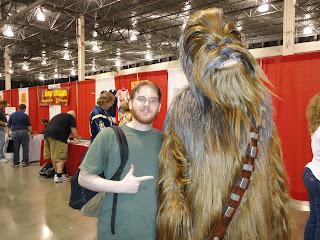