Since Jonathan Cimaglio moved away from the Bandits, they had to go to him! That's right. The Bandits traveled to Minnesota just for Cimags! Very impressive.
Bandits fan and big-time grapher Cimags moved to Minnesota last year. I hated to see him leave. He's a good guy and fun at the games.
Earlier this season, the Bandits played a few games in Mankato, MN. Cimags made the short trek to catch most of the games. Of course he did! The Bandits couldn't be that close without Cimags going there. I did mention that he is a super fan!
I follow his graphing on social media and the Cimags YouTube channel.  He's having a good year getting autographs from athletes and other notables. I couldn't even guess how many autographs he has.
His picture mate below is also having a good year.
It was a successful series in Mankato for the Bandits. Mankato native pitcher Coley Ries got to pitch in front of her home crowd.
Cimags will return to Chicago later this season and he will be attending a Bandits game. It'll be good to see him and to see him in action getting more graphs and pictures. Of course, I'll be there, too, getting some of my own. 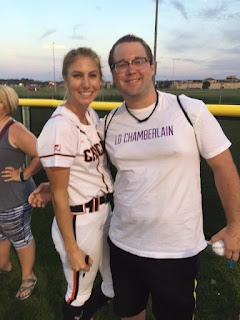 Brenna Moss and Jonathan Cimaglio in Mankato, IL-June 2018.
Posted by Johngy at 6:00 AM