To baseball fans, the Nasty Boys were a group of relievers with the Cincinnati Reds in the late 1980's. To wrestling fans, the Nasty Boys are Brian Knobbs and Jerry Sags.
Knobbs was born in Allentown, PA and Sags was born in Tampa, FL, but the Nasty Boys were born in Nastyville. Wrestling's Nasty Boys debuted in the mid-1980's and won titles everywhere, while taking their opponents to such places as "Pity City" and the "Pit Stop." They are pretty much retired now, but make occasional appearances (usually non-wrestling) on the indy scene and at comic cons.
Their Celebrity Jersey Cards come from a wrestling-themed night the Marlins held. Knobbs gets extra points for having a title belt on his Celebrity Jersey Card, although I am not sure which belt it is. Sags gets extra points for including a Fox broadcaster on his card, but I am not sure who that is, although giving a live mic to Sags might have been a mistake.. 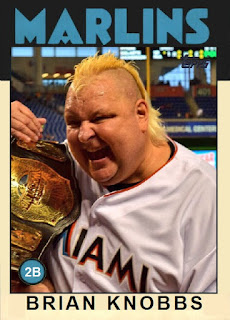 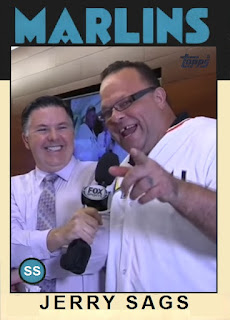