Born in Virginia, Marty Brennaman has been a broadcaster for the Cincinnati Reds since 1974, originally teaming with former Reds pitcher Joe Nuxhall. Brennaman has called 6 no-hitters in his career (including one perfect game), Hank Aaaron's record-tying 714th home run and many other great moments. Anything other than a Reds jersey would be out of place for Brennaman's Celebrity Jersey Card. 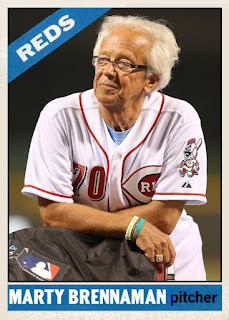 Journalist Bill Hemmer has worked for CNN, Fox News and other outlets during his career. He worked as a disc jockey and in sports production before his caraeer really started to take off. He also backpacked around the world for a year. Hemmer threw a ceremonial pitch wearing #22, most notably worn by Dan Driessen, to earn his Celebrity Jersey Card. 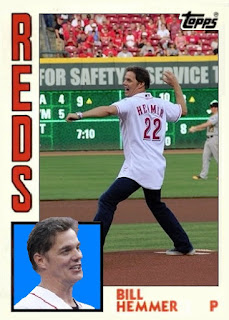