After an excellent career at Brigham Young University, Glen Kozlowski was selected by the Chicago Bears in the 11th round of the 1986 NFL draft. A serious knee injury in his senior year probably caused him to be drafted later than he should have been.
Koz recovered from the injury and played with the Bears from 1987-1992. In 66 games he had 31 receptions and played special teams.
I had never met Koz, but he was always on my "watch" list. That situation was corrected when he appeared at Bridges' Scoreboard in Griffith, IN. I combined a visit with my dad with Monday Night Football at Bridges with Koz.
Bridges has had many guest athletes over the years and all have been very good, but Koz was even better than the average guest. He really took time with everyone and made many special moments for the fans. We talked about his first NFL touchdown, among other topics.
Bridges is a great place to watch any game or just to hang out. There's always a friendly, lively crowd, tasty food and often some extra excitement, like bingo or other such activity.
Occasionally, you'll even see a guest celebrity, like this Saturday, September 22, when William "The Fridge" Perry is appearing! Check out BridgesScoreboard.com or the Bridges Scoreboard Facebook page to get info and updates. Better yet, stop by if you're in the area! 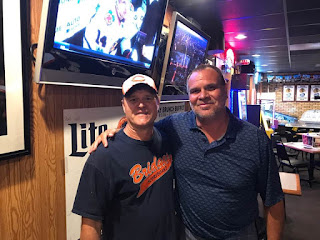 Glen Kozlowski and Scott Bridges in Griffith, IN-October 2017.
Posted by Johngy at 6:00 AM