Born in Jackson, MS, LeAnn Rimes rose to fame on the country charts, before going more mainstream. Rimes never abandoned her country roots though. She showed her loyalty to Nashville by donning the Tennessee Titans jersey for her National Anthem performance, earning her a Celebrity Jersey Card in the process. Kicker Ryan Succop is the latest (and current) Titan to wear that number. 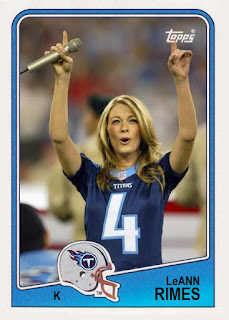 Carrie Underwood was born in Oklahoma. She rose to fame on American Idol, winning the 4th season in 2005. She has gone on to a very successful career. She sang the National Anthem at a Jacksonville Jaguars game and earned her Celebrity Jersey Card. Surprisingly, #12 has only been worn by 5 Jaguars during 13 seasons. Wide receiver Dede Westbrook is the latest (and current) Jaguar to wear #12. 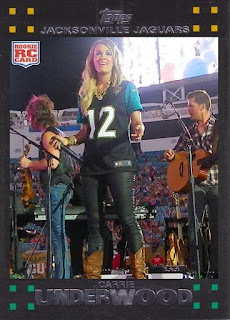 Both of these are awesome! Love seeing the 88T design with a Titans helmet.

Thanks, Fuji. I sort of bent the time frame, but my blog, my rules. :)