Celebrity Jersey Cards is a regular series in which I create virtual trading cards for celebs wearing sports jerseys. Today, we combine wrestling with football.

Joe Hennig is a third generation pro wrestler. His grandfather was Larry "the Axe" Hennig and his father was the last "Mr. Perfect" Curt Hennig. Joe has not achieved the level of success as they did, but he is a one time Intercontinental champ and a 2 time tag team champ in the WWE. He donned his home town Minnesota Vikings jersey for his Celebrity Jersey Card. He was also joined by felow wrestlers Cesaro and Sheamus. Although not visible in this shot, Cesaro wears #80, while Hennig and Sheamus wear #17. 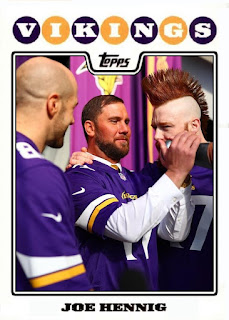 Starting her career as a fitness model, Celeste Bonin gained fame in the WWE as Kaitlyn. She was the winner of NXT for the third season and she also won the Divas title once. A native of Houston, TX and now a resident of California, Bonin wore the #52 Ray Lewis jersey of the Baltimore Ravens for her Celebrity Jersey Card. 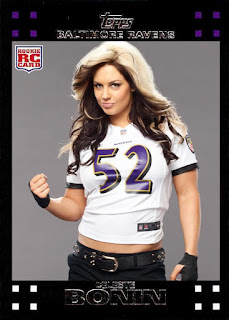