Raymond Joseph Teller is the silent partner in the magic entertainment duo of Penn & Teller. Actually, his legal name is now the mononym "Teller," having legally changed it.
Teller began performing with his friend Weir Chrisemer in the early 1970's. He met Penn Gillette in 1974 and he joined the duo to form a trio. In 1981, Penn and Teller started to perform exclusively together.
His trademark silence stems from his early days performing when he discovered that the audience paid more attention to his act, if he didn't talk. While almost always silent, Teller has spoken a few times on stage or in television shows and movies, most notably on tv's Penn & Teller: Fool Us.
Teller is a master of sleight-of-hand. He is probably the better technical magician of the pair, with Penn being more theatrical and involving more aspects of entertainment.
After their shows in Las Vegas, the duo meets and greets all fans. They usually pose separately and Teller actually takes his selfies himself.
I wrote about our experience online for Global Traveler at Penn & Teller at the Rio. In case you missed it, yesterday I featured Penn on Johngy's Beat. 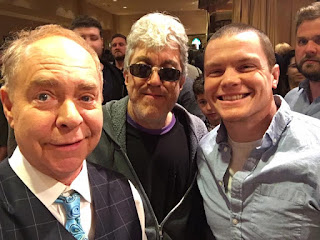