The Chicago Auto Show is coming to McCormick Place February 9-18. Along with all of the cool vehicle stuff, there will be plenty of local celebrities. Looking forward to the show, I recall some of the fun times last year.
ABC7 had a big presence at last year's CAS. Many of the newscasters made appearances at the show, including Cheryl Burton.
A native of Chicago and grad of the University of Illinois, Burton made her television debut on Romper Room. She also appeared on Star Search and was a cheerleader for the Chicago Bears.
Burton's broadcasting career began in 1989 on WGN-TV. She joined WLS-TV in 1992 and has been there ever since. Currently, Burton co-anchors the 10 pm newscast alongside Alan Krashesky. Burton replaced the retiring Kathy Brock in June of 2018.
Burton was extremely fun at last year's CAS. It probably starts with her awesome pants. I made sure to have the pants visible in the picture I took with Burton. Actually, I had already taken a picture with Burton and fellow newscaster Liz Nagy, but I asked Burton for a solo full body one to show off her pants. She was very gracious and we had a fun chat about the pants.
Burton looked fantastic up close. She's not just a pretty face though. She received her B.S. in Psychology and Biology from the U of I.
Go to ChicagoAutoShow.com for more info. You can also follow the Chicago Auto Show on Facebook and the Chicago Auto Show on twitter for updates, scheduling and more info. You can follow Burton at @BurtonABC7 on twitter. 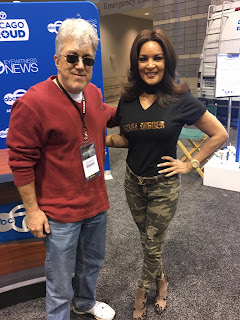