A native of California, Erin Rohac became one of the Anaheim Ducks Power Players after her mom suggested she try out. Rohac is quite an athlete, competing in kick boxing, triathlon and more, including hockey o course. She has a Master's Degree from Cal Fullerton University and also has a full-time job in the business world. Rohac wears an Anaheim Ducks jersey, along with pants, gloves and skates, for her Celebrity Jersey Card. 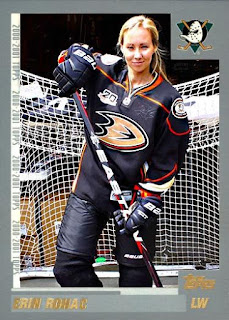 Born in Okmulgee, OK, Linda Le rose to stardom as a top cosplayer. She is also a model, artist, internet personality and more. She is also known as Vampy Bit Me or Vampy from her cosplaying. Le earned her Celebrity Jersey Card by repping the San Jose Sharks. The #23 hs been worn most recently by Barclay Goodrow . 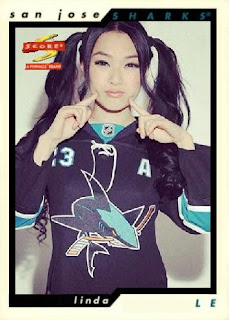