Brittany Cervantes and the 2019 Cleveland Comets

At the recent series between the Chicago Bandits and the Cleveland Comets, I caught up with Brittany Cervantes, who holds a special place in my memories. Six seasons ago, Brittany was the first player I interviewed at a Chicago Bandits game. That interview can be found at On the Beat With Brittany Cervantes.
Brittany  had a stellar career on the softball diamond while at the University of Kentucky. She continued thriving when she joined the Chicago Bandits in 2012. She was an ALL-NPF selection in 2014 and 105, won the Cowles Cup in 2015 and 2016, was named the 2015 Offensive Player of the Year and was named MVP for the 2016 Cowles Cup. "Cerv" was one of the most popular players during her time with the Bandits.
Brittany played for the Scrapyard Dawgs in 2017 and 2018. She just recently signed with the Comets (coming back to the NPF) as part of the relationship with Team Mexico.
Brittany is a real pleasure to watch and know. She is versatile and a true team player. She represents everything good about the nPF and is a credit to women's softball.
When not playing, Brittany is well into her coaching career. Currently an assistant at her alma mater Kentucky, Brittany is on the path to being a head coach. With her knowledge, personality and leadership skills, she will make a great head coach and I look forward to following her career.
It was just great seeing her back in Rosemont and back in the NPF. There is always something special about seeing former Bandits.
Go to ChicagoBandits.com for more info on the Bandits, including schedules. Also, follow the NPF at NationalProFastpitch.com. 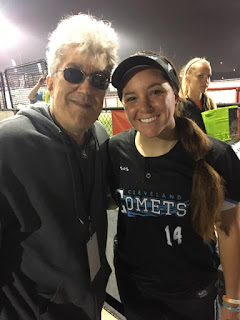 Brittany Cervantes and me in Rosemont, IL-June 2019.
Posted by Johngy at 6:00 AM