Cards That Never Were is a recurring series in which I create virtual trading cards for players missed in various sets. It is a concept I have borrowed from too many to list, but I appreciate all of them. Actually today, I am featuring 2 Cards That Never Were that I did not create.
Speedy outfielder Nyls Nyman made his debut with the Chicago White Sox in 1974, getting 9 hits in 15 plate appearances and giving hope for the future. Unfortunately, in 1975 he slumped to .226 in 106 games. He appeared in only 8 games in 1976 and one in 1977 to end his major league career. He was traded to the St. Louis Cardinals in September of 1977, but never made it back to the majors.
Nyman had Topps cards for 1975 (a quad pictured Rookie Outfielders card) and 1976 (his first and only solo card). I wanted to make cards for him for 1977 and '78, but finding quality pictures was difficult. Making it even harder was the uniform change. Unlike most times, I could not take an older picture and use it for the later cards, because the Sox went with a drastic change.
Nyman sat on my want list for a long time. Thanks to the work of two very productive and creative folks, I no longer have to make the cards. Below are the Cards That Never Were for Nyls Nyman, with proper credit to the awesome creators.
This 1977 Nyman card was created by David Jenkins of the Facebook group Custom Baseball Cards. It's a great Facebook group which features thousands of card creations by many talented folks. I even contribute on occasion. 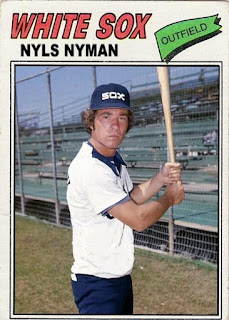 This 1978 Nyman card was created by When Topps Had Balls. It's a fantastic site featuring hundreds of "missing" card creations. 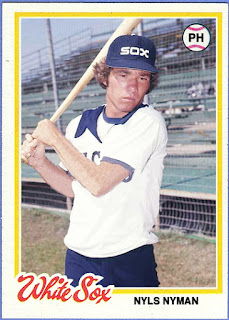