Born in Tacoma, WA, Jerry Cantrell worked odd jobs and played music after quitting college. He eventually would become founder, lead guitarist, co-lead vocalist and main songwriter of Alice in Chains. Cantrell is widely considered to be one of the greatest guitarists of his era. He stayed true to his Washington roots when he made an appearance at a Seattle Mariners game, thus earning his Celebrity Jersey Card. He gets extra points for wearing an official cap, too 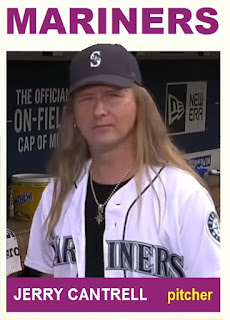 William DuVall was born in Washington, D.C. and played in many bands before joining Alice in Chains as co-lead vocalist and rhythm guitarist. In December 2018, DuVall and Cantrell were tied at # 10 on Total Guitar/MusicRadar's "15 Best Rock Guitarists in the World Right Wow" poll. DuVall also joined Cantrell in an appearance at a Mariners game to earn his Celebrity Jersey Card. DuVall gets extra points for being the first person to appear holding his cd. 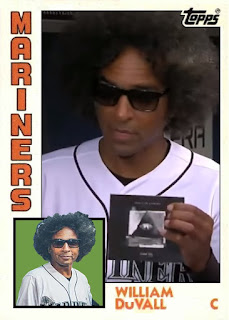