My bud Tony Feddeler has made several appearances here. Neither one of us can remember where we met. We know it was either a comic con, a Chicago Bandits game or a wrestling show. In any case, we did meet and have become friends, often haging out at any one of the above mentioned places.
At a Days of the Dead event several years back, Tony met "Rowdy" Roddy Piper, my favorite wrestler of all time. A wrestling fan, Tony has met many of the greats, but Piper has to be near the top of that list. I am sure Piper appreciated Tony's They Live shirt, because I heard him talking about it. They Live was Piper's first big movie outside of wrestling and it has become a cult classic.
That was pure Piper. He connected with the fans. People weren't just dollars to him. He did not believe in giving a quick signature and pushing the line at a high speed. Piper gave each person his special moment.
Piper passed away way too soon. He is missed by all. Tony had the chance to meet Piper and he took it. This is the lesson. Never pass the chance to meet your favorites, because you never know if you'll get a chance again.
Days of the Dead continues to bring in legendary wrestling guests. The next DotD is July 5-67 in Indianapolis, IN. So far, Kurt Angle and Sgt. Slaughter have been announced. Check DaysoftheDead.com for more info and updates. 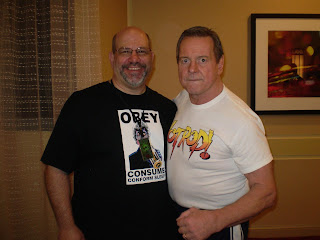