This is a regular series in which I create virtual trading cards for celebrities wearing jerseys. Once again, we are working our way alphabetically through all of the Major League Baseball teams. Today, we get political.

Elizabeth Dole was born in North Carolina. Long before marrying husband Bob in 1975, Elizabeth had been involved in politics, including campaigning for the Kennedy–Johnson presidential ticket in 1960. Doles Celebrity Jersey Card not only predates the existence of the Nationals, it precedes the origin of the franchise in Montreal. 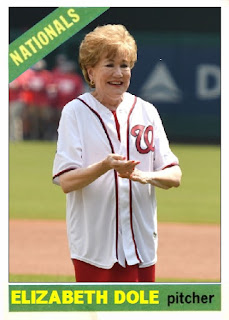 Politician and civil rights leader John Lewis was born in Alabama. Since 1987, he has served as the U.S. Representative for Georgia's 5th congressional district. Lewis was heavily involved in many protests and marches. He suffered verbal and physical abuse for his cause, but he remained resolute. The Celebrity Jersey Card for Lewis also predates both the Washington Nationals and their predecessors the Montreal Expos. 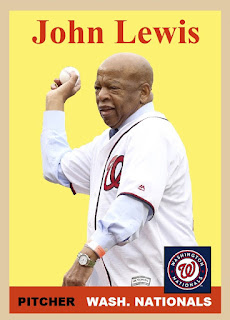