Born in Sandusky, OH, Jon Gruden played quarterback on the amateur level before starting his coaching career. He became the youngest head coach to win a Super Bowl, when he led the Tampa Bay Buccaneers to a championship in Super Bowl XXXVII. Gruden did some broadcasting, but returned to the NFL last season with the Raiders. Gruden wore #1 on his Celebrity Jersey Card. That number was probably most notably worn by Sean Rodriguez. 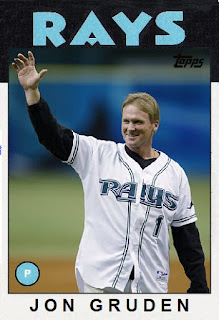 A native of California, tennis player CoCo Vandeweghe was born into a sports family. Her grandfather Ernie, Uncle Kiki and her grandmother's brother Mel Hutchins all played in the NBA.Her maternal grandmother Colleen Kay Hutchins was the 1952 Miss America. CoCo tried several sports, before settling on tennis. In singles, her highest ranking was #9, while in doubles, she reached #14. She had an unusual first pitch at the Rays game, which landed her on a Celebrity Jersey Card. 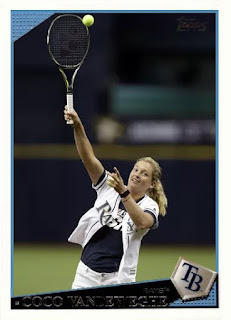