Today, I am pretty much taking a vacation day. Longtime friend, Johngy's Beat contributor and Star Wars aficionado Jason Fleigel attended Star Wars Celebration earlier this year on behalf of the Beat and recapped one of his celeb encounters.

One of the great things about Star Wars Celebration is getting to meet actors, artists, and authors from the franchise. Along with Ashley Prester and Bill Nedrow, I met my favorite author Timothy Zahn at a book signing. This was the second time I had met Mr. Zahn, the first time was at the first Celebration I attended in 2005.
Mr. Zahn autographed two books for me including the annotated edition of the Heir to the Empire novel. For those unfamiliar with this book, when it came out in 1991 it was the first such Star Wars book in 7+ years and became an immediate New York Times bestseller. It showed Lucasfilm that there was still life in the Star Wars saga and often the book and Mr. Zahn do not get enough credit for helping to bring Star Wars back to life and to the level it has achieved today.
And for fans of Mr. Zahn’s work, he did mention to me that there are annotated versions of the other two books in the Thrawn Trilogy (Dark Force Rising and The Last Command). They were put on the shelf with the Disney purchase, but he is hopeful with the revival of Thrawn in Rebels and his latest novels, that perhaps these annotated versions could some day see a release.
Side bar, thanks to attending 4 different Celebrations, I have the opportunity to meet the following Star Wars celebrities, many by just bumping into them...
Peter Mayhew (Chewbacca)
Ahmed Best (Jar Jar Binks)
Kenny Baker (R2-D2)
Sandi Findlay (Sly Moore)
Anthony Daniels (C-3PO)
Sam Witwer (voice of Darth Maul)
Matt Busch
Seth Green
Donald Faison

I appreciate the report as well as the excellent work Jason does for the Beat. Stay tuned for more Jason recaps in the future. 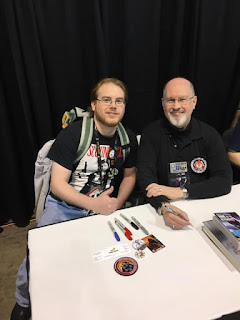 Jason Fleigel and Timothy Zahn in Chicago, IL-April 2019.
Posted by Johngy at 6:00 AM