Cards That Never Were is a recurring series in which I create virtual trading cards for players missed in various sets. It is a concept I have borrowed from far too many to list, but I appreciate all of their efforts.
Ricky Seilheimer was selected by the Chicago White Sox in the 1st round (19th overall) of the 1979 MLB June Amateur Draft. In his first pro season, at the age of 19, Seilheimer was promoted to the White Sox. He was the youngest player in the majors at the time.
In 21 games, Seilheimer had 57 plate appearances. He hit .212 with 1 home run, 3 rbi's, 4 runs scored and 1 stolen base. Unfortunately, that would be Seilheimer's lone MLB season. He stayed in the White Sox organization through the 1986 season, splitting his time between AAA and AA ball.
Topps did not give Seilheimer a card in the 1981 set. White Sox catchers Glenn Borgmann, Bruce Kimm and Marv Foley received cards, along with Ron Pruitt, who was listed as an outfielder-catcher. Marc Hill received a card in the Topps Update set.
I have unsuccessfully searched for a good picture of Seilheimer with the White Sox. Recently on his wife's social media, she posted a beautiful picture and I immediately created this card. This one was a long time in the making, but I think it came out great.
Seilheimer just celebrated his 59th birthday on August 30. Happy birthday and I hope he likes this card if he ever sees it. 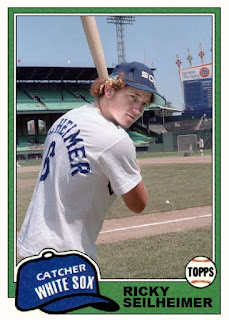