Born in Florida, Jack Nicklaus gained fame on golf courses all over the world. The Golden Bear won the Masters six times and the U.S. Open four times, along with 117 professional wins. He was the PGA Rookie of the Year, was the PGA Player of the Year five times and topped the PGA tour money list eight times. There is no debate he is clearly among the game's elite. He donned a Red Sox jersey to throw out a first pitch and earn a Celebrity Jersey Card. 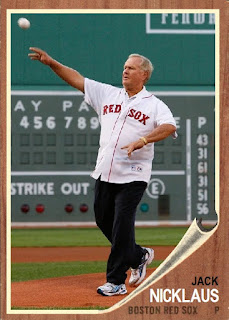 Nick Faldo was born in England and states he got hooked on golf watching Jack Nicklaus play the 1971 Masters Tournament. Faldo would go on to win the Masters three times, along with 41 pro wins. For his Celebrity Jersey Card, Faldo wore #34, most notably also worn by David Ortiz, although my favorite #34 would be Jimmy Piersall. 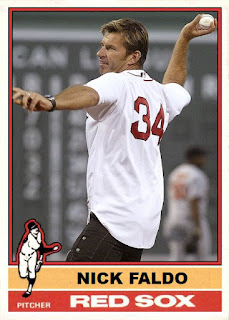