Friend Encounters: Paul Sorvino and Troy Babbs at Days of the Dead 2018

I met Troy Babbs at one of the Days of the Dead conventions several years back. Troy was a volunteer staffer there. While Troy left the Days team with some other friends last year, it did not end our friendship.
Troy is one of the nicest, most genuine people you could ever meet. He is also a load of fun. I always feel very positive after hanging with Troy anywhere. He has helped me at various conventions and I greatly appreciate his many efforts.
At the last DotD that Troy attended, he met legendary actor Paul Sorvino. With a lengthy resume like Sorvino has, you could pick several big roles, but his work on The Sopranos has to be one of the more notable roles. He also played the lead character in Joe Torre: Curveballs Along the Way.
Sorvino and Troy would make a great buddy pair for a movie. I could see it now. Troy's humor and Sorvino's tough guy presence would combine for lots of entertainment.

I don't see Troy quite as much since he left DotD, but it's always fun when we catch up. You always have to keep good people in your life somehow and Troy is one of the best.
The next Days of the Dead is October 11-13 in Dallas. Check out DaysoftheDead.com for all of the info and check back here for recurring coverage. 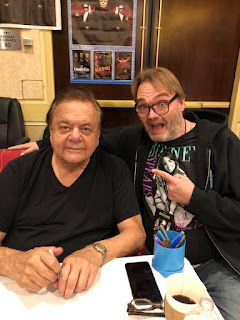 Paul Sorvino and Troy Babbs in Schaumburg, IL-November 2018.
Posted by Johngy at 6:00 AM