Celebrity Jersey Cards is a regular series in which I create virtual; trading cards for celebrities wearing jerseys. Today, we feature a couple Deal Or No Deal models.

Born in Rhode Island, Claudia Jordan held the Miss Rhode Island Teen USA 1990 title. She later placed in the top ten in the Miss USA pageant in 1997. A former "Barker Beauty" from The Price Is Right, Jordan held briefcase #1 on Deal or No Deal. On the football episode of Deal, Jordan represented the New Orleans Saints to earn her Celebrity Jersey Card. 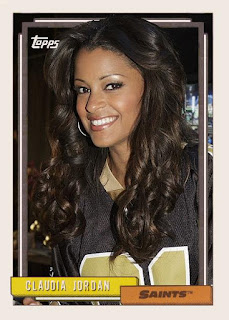 California native Keltie Martin was building a solid resume as a model, when she joined Deal or No Deal as a substitute briefcase model.  She holds the record for appearing with the most different numbered briefcases with at least nine different numbers. She eventually found a permanent spot with briefcase #4 repping the Arizona Cardinals and thus earning her Celebrity Jersey Card. 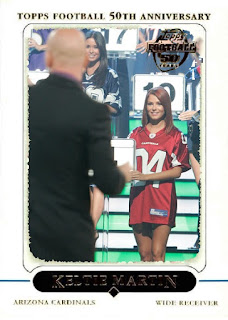