Today I am featuring a really good dude who is a wrestling promoter. Jayson Maples is the man behind Heroes and Legends Wrestling Fan Fest, based out of Fort Wayne, IN, but expanding outward of late.
I first met Jayson years ago when I attended one of his shows. His shows feature big name wrestling legends and a full card of great wrestling matches. Many of my wrestling favorites and friends have wrestled there, like Sugar Dunkerton, Hardcore Heather Owens, Scotty Young and others. It is a full day of wrestling entertainment.
Over the years, I have witnessed Jayson undergo awesome changes. Years ago, Jayson was a wrestler and much heavier. He has lost a bunch of that weight and is healthier than ever. He is also happier than ever, especially in his family life. I am very happy for Jayson. He deserves it all, because he has worked hard and is such a great guy.
Stephanie Bellars also seems to be doing better than ever. Stephanie rose to fame as Gorgeous George, accompanying "Macho Man" Randy Savage to the ring during his stay in WCW. Stephanie's stint in pro wrestling didn't last long, but she remains a fan favorite.
While I don't believe Stephanie has been to Heroes and Legends Wrestling Fan Fest, she did connect with Jayson at a convention last year. Hopefully, he was working on bringing her in for his convention.
For more info on Jayson's great events, go to HeroesandLegendswrestling.com. You can also follow Heroes and Legends Wrestling on Facebook for more frequent updates. 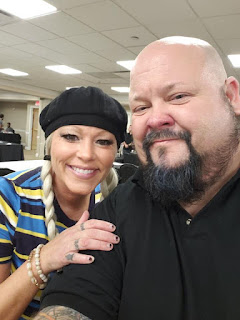 Stephanie Bellars and Jayson Maples in Atlantic City, NJ-August 2018.
Posted by Johngy at 6:00 AM