Celebrity Jersey Cards is a regular series in which I create virtual; trading cards for celebrities wearing jerseys. With the NFL regular season ended, we salute the two worst teams for this season.

Nick Lachey was born in Harlan, Kentucky, with the Cincinnati Bengals being the closest NFL team as he grew up. Lachey is a big fan of the Bengals, often wearing a Bengals jersey while attending games. In his Celebrity Jersey Card, Lachey is wearing #14, most recently (and currently) worn by Andy Dalton. Why he is holding a bottle of Tide is unknown, but it is a CJC first. 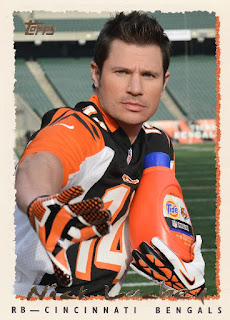 Born in Miami, FL, Jon Jay has gone on to an excellent Major League Baseball career. He debuted in 2010 with the St. Louis Cardinals. After six seasons with the Cards, Jay has moved around a lot, moving on to the San Diego Padres, Chicago Cubs, Kansas City Royals, Arizona Diamondbacks and Chicago White Sox. Jay wore a Washington Redskins jersey when the Cubs had a sports jersey themed road trip. I don't know of his connection to the Redskins or the #21, most famously worn by Deion Sanders. 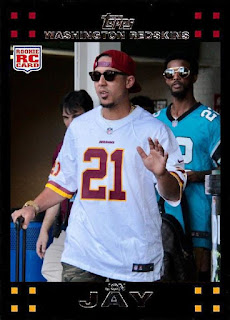