Bridges Scoreboard is a neighborhood sports bar in Griffith, IN. It is my dad's "go-to" place. I have been there several times, as well. They have solid bar food and a lively, but not crazy atmosphere.
A native of Griffith, co-owner Scott Bridges was a kicker for Indiana State University in the mid-80s. Now he runs Bridges with his brother Jeff.
Bridges has held several athlete appearances over the years. The latest was wrestling star Marcus "Buff" Bagwell. Buff has had a lengthy and successful career. He had a lengthy run in World Championship Wrestling and has been on the independent scene since they were bought by the WWE in  2001.
As expected Buff drew a big crowd and he delighted everyone with his stories and humor. Buff truly is "the stuff," as he'll gladly tell you. Scott even got into the act by donning Buff's trademark hat.
Go to BridgesScoreboard.com for more info. Also, check the Bridges Scoreboard Facebook page for more frequent updates. 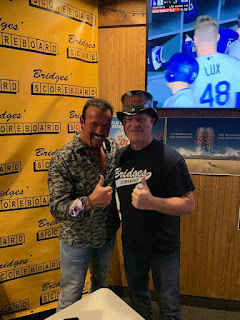 Buff Bagwell and Scott Bridges in Griffith, IN-October 2019.
Posted by Johngy at 6:00 AM