Celebrity Jersey Cards is a regular series in which I create virtual; trading cards for celebrities wearing jerseys. Today we salute two teams bounced from the NFL playoffs last weekend.


Olivia Culpo was Miss Rhode Island, Miss USA and Miss Universe. She has gone on to become a media personality. She also has gone on to date several stars, including Tim Tebow and Danny Amendola. I believe her Celebrity Jersey Card is from her time with Amendola, but one wonders why she is wearing Tom Brady's #12 and not Amendola's 80. 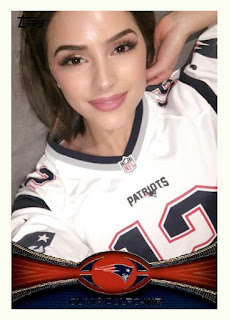 Born in a Philadelphia suburb, Jim Cramer is a television personality, author, financial adviser and an Eagles fan. He is a season ticketholder of more than 20 years. His highlight was when the Eagles won the Super Bowl in 1988. He wore a DeMarco Murray jersey on his show to merit the Celebrity Jersey Card, but methinks he needs a new one, since Murray is no longer with the team/ 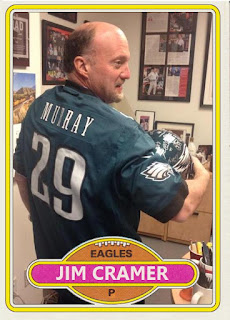