Cards That Never Were is a recurring series in which I create virtual cards for players missed in various sets over the years. It is a concept I have borrowed from far too many to list, but I appreciate all of them. You can find more of my creations and a lot of other great creations (and not just baseball cards) in the Custom Baseball Cards group on Facebook.
Mervin Weldon Rettenmund was signed by the Baltimore Orioles as an amateur free agent in 1964, after a successful career at Ball State. After four seasons in the minor leagues, Rettenmund was called up to the Orioles late in the 1968 season. After the '73 season, Rettenmund was traded to the Cincinnati Reds, where he stayed for two seasons, before being traded to the San Diego Padres. After two seasons in San Diego, he was traded across the state to the California Angels. He appeared in just two games in his third season with the Angels before the team released him, ending his 13 year career.
For his career, Rettenmund had 693 hits, 66 home runs, 329 rbi's, 393 runs score and a .271 average. Mostly a fourth or platoon outfielder, Rettenmund was on three World Series teams, winning one with Cincinnati and splitting two with Baltimore.
For his efforts, Rettenmund had Topps baseball cards from 1969 through 1980. While it is understandable Topps did not give Rettenmund a card in their 1981 set, considering his minimal playing time and his career ending early in 1980, that doesn't stop me from making a "career capper" for him. 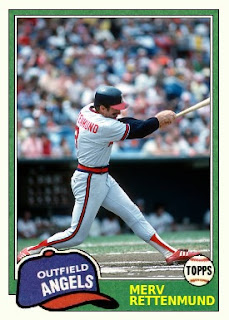