Born in England, golfer Nick Faldo won three Open Championships and three Masters. He was ranked #1 for 97 weeks. Now mostly retired, he is a golf analyst. He threw out a pitch for the Atlanta Braves, wearing a #6 jersey to represent his six major championships. Faldo can now add a Celebrity Jersey Card to his accomplishments. The best #6 for the Braves would probably be Davey Johnson.. 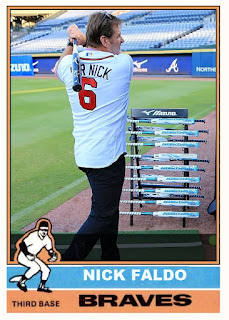 Quarterback Matt Ryan starred at Boston College before being selected #3 overall by the Atlanta Falcons in the 2008 NFL Draft. In 2008, he was the NFC Offensive Rookie of the Year and in 2016 he was the NFL MVP. In 2016 he led the Falcons to Super Bowl LI, but lost to the New England Patriots. At one point, "Matty Ice" was the highest paid player ever in the NFL. He has thrown 4,460 passes in his NFL career, but it was his toss for the Braves which earned him a Celebrity Jersey Card. 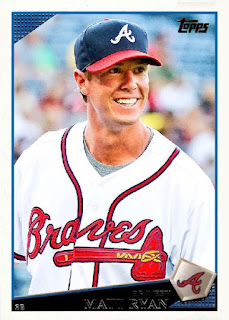