Wrestler Ric Flair was born in Tennessee, but was raised by his adoptive parents in Edina, MN. Considered to be one of the greatest wrestlers of all time, Flair has held a World tile belt between 16-25 times, depending on which are counted. Flair is a two-time WWE Hall of Famer (as a solo and with the legendary Four Horsemen). Now retired from in-ring action, Flair is proud to see his daughter Charlotte among the top WWE female performers. Falir earned this Celebrity Jersey Card when throwing out a pitch at an Astros game. 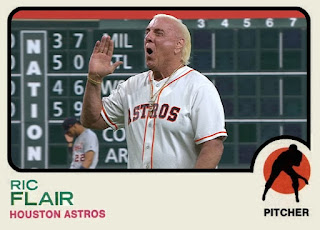 Texas native boxer George Foreman won a Gold Medal in the 1968 Olympics. As a pro, Foreman was 76-5, highlighted by two heavy weight championships. He is also well known for his George Foreman Grill. Foreman earned his Celebrity Jersey Card when throwing out a pitch for the Astros. 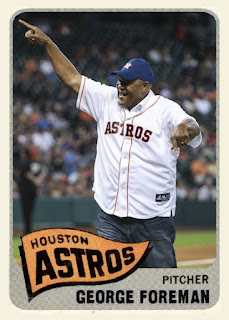