Cards That Never Were is a recurring series in which I create virtual trading cards for players missed in various sets. It is a concept I have borrowed from far too many others to list, but I appreciate all of their efforts. Usually, I only feature my own creations, but today I make the exception for those others that I mentioned.
Chris Ward was selected by the Chicago Cubs in the 3rd round of the 1968 amateur draft. The outfielder made his MLB debut with one pinch hitting appearance in 1972. After spending 1973 in the minors, Ward returned to the majors with the Cubs for the 1974 season. Ward spent 1975 and '76 in the Cubs minor leagues. He spent 1977 playing in Triple A for the San Diego Padres and Cleveland Indians, before retiring. In total, Ward played in 93 games, collecting 28 hits, with one home run, 15 rbi's and a .203 batting average.
For his efforts, Ward received a Topps card in the 1975 set, which would make it a career capper, although that wasn't known at the time. Obviously, his 1972 playing time did not merit a card, although he could have gotten on one of the "prospects" cards.
I originally set out to create a missing 1973 card, but in my search for a usable picture, I found a fully created card. I also found a 1974 virtual card from another creator. They saved me time and effort and created very nice cards.
David Jenkins of the Facebook group Custom Baseball Cards created the 1974 card, while Gio over at When Topps Had Balls created the 1973 card. These are examples of the fine work by others. I highly encourage you to check out the Facebook group and Gio's site. Both are excellent sources for many great card creations (and not just baseball). 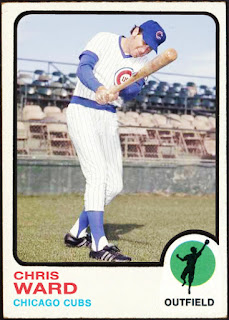 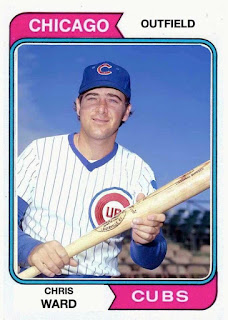