Janie Takeda was a star outfielder at the University of Oregon. In four seasons, in 241 games, Janie hit .392, with 11 HRs, 132 RBIs, 20 4R and 102 SBs. She was a 2 time NFCA Second Team All-American, a one time NFCA First Team All-American and a three time First Team All-Pac-12.
On the international stage, she was a three time World Cup of Softball Silver Medalist, a one time Pan American Championship Gold Medalist and a one time Pan American Games Gold Medalist. She is also a two time WBSC Women's World Championship Gold Medalist.
Takeda was selected by the Dallas Charge with the 26th overall pick in the 2015 NPF Draft. She chose to concentrate her efforts on Team USA.
On a personal level, Janie is married to Major League Baseball pitcher Jake Reed. She says playing for Team USA wasn't really a dream, because she didn't think she would be at that level. Janie is on that level though, as evidenced when Team USA named her to the 2020 Olympics roster.
Unfortunately, the Olympic dream is delayed until 2021, but it'll be just as sweet when Team USA takes the field. As I have written, I know most of the players and I look forward to seeing them go for the gold. I am usually ambivalent to the Olympics, but at least for softball, I will be intently watching the games. In fact, I'll be following the team on the road to the Olympics.
Go to TeamUSA.org for more info on the USA Olympic team. Follow Janie at @_JanieReed on Instagram. 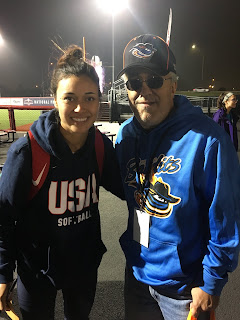