The Motor City Comic Con was supposed to be this weekend, but it has been postponed due to the pandemic. While I sadly wait for the situation to be resolved and the MCCC to be rescheduled, I am recalling some of my favorite times there.
I met Monique Dupree at one of my first times at MCCC. "Tha Original Gata" is a singer, model, actress and more, including a wrestling personality. Sometimes called the original black scream queen, Monique's resume includes all genres of movies, dating back to her role in Lean On Me.
She is also the sister of actor Tony Todd.
Monique's work in wrestling has mainly been in House of Hardcore, the wrestling events headed by hardcore legend Tommy Dreamer. I was happy to see Monique at Great Lakes Championship Wrestling's Blizzard Brawl (which is a joint effort between Dreamer and Wisconsin promoter and #SuperFriend David Herro) last year and at C2E2 this year. At both events, she wasn't even listed as a celebrity guest, but she was accompanying Dreamer. I was just happy to see her again! I pointed out Monique to a few fans who didn't realize who she was, but were very happy to meet her.
Her combination of acting and wrestling makes her a dual threat at comic cons. She draws fans from both areas of entertainment. Actually, her beauty and personality make her a triple threat, as fans are drawn to her just for being her. She is very sweet and fan-friendly and a great addition to any comic con.
Check MoniqueDupree.com and follow Monique on at @ThaOriginalGata on twitter for more info and updates on Monique. Go to MotorCityComicCon.com for more info and follow MCCC on Facebook for more frequent updates. 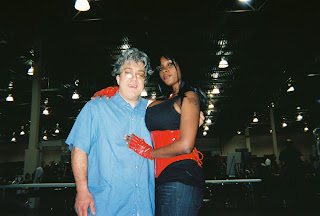