Friend Encounters is a weekly series about my friends who have met celebrities.

The Squared Circle Expo has been postponed from the original May date to a future date to be determined. While I look forward to the convention, whenever it is, I am featuring a couple people involved.
Ed Gonzales and "Hardcore" Heather Owens have carved out a career on the independent wrestling scene. I met both through Resistance Pro Wrestling several years back. Actually, I probably met them even before RPro, when our paths most likely crossed at a few horror conventions.
Ed and Heather were part of the organizational team who put on the horror cons. Like Adolfo and Carrie, Ed and Heather were usually a blur at those shows. They played a part in more wrestlers being added as the years went on and they were usually heavily involved with events including the wrestlers at the convention.
It's a natural for them to be involved in the Squared Circle Expo. I am sure they will help bring in great wrestlers, while also contributing to the SCE in many other ways.
Actually, I am very much looking forward to seeing Ed and Heather, as much as seeing the big name wrestlers. They are two really cool people. They work very hard and play even harder. They are a lot of fun and I miss seeing them.
The dynamic duo didn't get a ton of pictures of themselves with the various celebrities over the years, but they did get one with Bret "The Hitman" Hart. That picture is one more person away from being a great stable. I would even volunteer myself. It would be a fantastic time.
I am sure Ed and Heather will be busy as usual at the Squared Circle Expo. I hope they take enough time to enjoy it themselves. I also hope they know how much fans love the event.
Check out SquaredCircleX.com and follow them at Squared Circle Expo on Facebook for all of the info and updates. I hope to see you all there when it is rescheduled.. 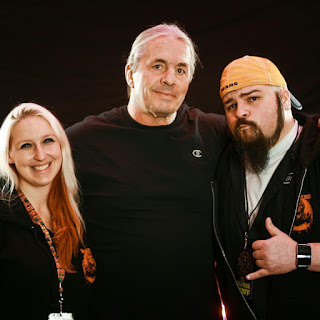