Baseball is back. With that announcement, my nephew Contributor Extraordinaire Matt Parker sent me a perfect picture for today.
Back in the summer of 2004, Matt's future wife Erin and sister Kailee went on the field at and met Chicago White Sox outfielder Magglio Ordonez. Matt quotes Erin as saying, "He was so cute."
Unfortunately for Erin, Kailee and Sox fans, this would be Ordonez's last season with the Sox. After the season, he signed as a free agent with the Detroit Tigers.
Ordonez played seven seasons with the Tigers, for 15 total seasons in MLB. He had 2,156 hits, 294 HRs and a .309 batting average. That would put him in the Hall of the Very Good.
Like Erin, I was also a fan of Ordonez, although not particularly a fan of the Sox then. I would have liked to see Ordonez finish his career with the Sox. It would have been cool to see him and Paul Konerko together for so many years.
While Ordonez bailed out of Chicago, Erin eventually signed as a free agent with Matt. They now are raising their beautiful little girl Delaney to be a Sox fan. Looking ahead, I wonder who Delaney will find "cute" on the team. Perhaps Nick Madrigal? Garrett Crochet? Only time will tell. Maybe someday in about 15 years, we will all find out when Delaney has her own encounter with a Sox player. 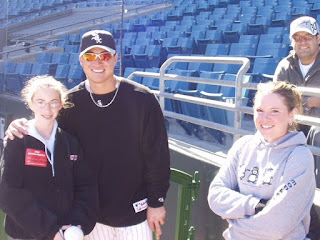 Kailee, Magglio Ordonez and Erin in Chicago, IL-Summer 2004.
Posted by Johngy at 6:00 AM