Jourdan Skirha and the Bandit Academy

The National Pro Fastpitch Chicago Bandits should be entering the last third of their season, but unfortunately 2020 has been derailed. There is still a lot of great stuff happening at the Ballpark in Rosemont though.
The Bandit Academy is open and there to help young softball players. The main group of instructors include Holly Scott, Abby Ramirez and Jourdan Skirha, but they are occasionally joined by others, including Bandits.
Jourdan is pulling double duty, as she is also the assistant GM for the Bandits. At a young age, she already is compiling an impressive resume.
A grad of Oak Forest High School, Jourdan was a member of the 2009 IHSA 3A State Championship team. Jourdan earned all-conference honors as a sophomore, junior, and senior and was named 2nd Team All-State in 2011 and 2012. She went on to Drexel University, where she played third base, second base, shortstop and outfield. In 2017, She was nominated for Drexel University’s Best Athletic Play for her pinch-hit, walk-off grand slam against Colonial Athletic Association conference rival, University of Delaware. I included a video of that grand slam in my interview with Jourdan at On the Beat With Jourdan Skirha.
I have often said that Jourdan is a blur of activity at the games, while in charge of game day operations. She oversees a lot of pre-game and in game fun activities. I am sure she brings the same type of dedication, energy and talent to the Bandit Academy.
Jourdan is a great role model, especially for young girls. At a young age, she holds a big job with a pro sports team. Earlier this year, Jourdan was very vocal on social media about the social and racial climate in the country. I applaud her courage in speaking out. Jourdan has a bright future and I will be proud to say I know her.
On a personal level, I appreciate Jourdan facilitating my first pitch and my batting practice session, two of my most memorable times covering the Bandits.
For more info, go to ChicagoBandits.com. Also, follow the Chicago Bandits on Facebook for more frequent updates and other news. 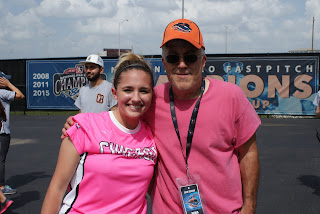