Holly Scott and the Bandit Academy

As we enter the heart of the summer, it saddens me to see no games at the Ballpark in Rosemont. There is still activity there though, in the form of the Bandit Academy.
Based at the Ballpark in Rosemont, instructors Holly Scott, Jourdan Skirha and Abby Ramirez work hard to help young players. The Bandit Academy offers private instruction, team workouts, camps, clinics, and other events. It aims to "improve, build upon, and create even more future opportunities in our sport."
Holly joined the Bandits organization in 2019 as the Director of Operations for the Bandit Academy. The Oak Park native brought an impressive softball resume with her.
A pitcher-outfielder at North Central, Holly compiled a career pitching record of 27-14 and a career batting average of .331.Holly earned All-Conference and All-Region honors in her career and led the Cardinals to the NCAA playoffs in 2010.
She started her coaching career as a Graduate Assistant Softball Coach at North Central College from 2011-13. She moved on to Lakeland College, the University of Illinois Chicago and North Central College, where she now serves as pitching coach.
I saw Holly's passion first hand last seaqson. She is another valuable asset to the Bandits organization and the Bandit Academy. Holly, Jourdan and Abby bring a wealth of experience, knowledge and dedication to the Bandit Academy and are also sometimes joined by others, including Bandits.
The Bandit Academy is offering a mini-camp June 22-25. They are four day camps, with 90 minute sessions having eight participants and two coaches per session.
For more info, go to ChicagoBandits.com. Also, follow the Chicago Bandits on Facebook for more frequent updates and other news. 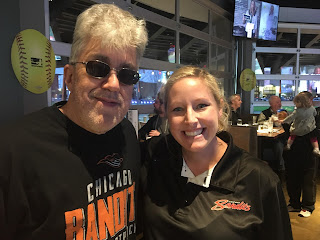 So glad to see that there is some stuff for kids this summer ... Way to go Bandit Academy!