John Skyler and The Resistance

Resistance Pro Wrestling has been making news of late. In recent weeks, RPro wrestlers Sugar Dunkerton, Brady Pierce, John Skyler and "The Ego" Robert Anthony have all wrestled for All Elite Wrestling. Additionally, RPro co-owner Jacques Baron made the announcement that RPro is returning.
It is very cool seeing RPro talent appearing on television. I saw all these men in RPro. I saw how hard they worked. I saw how much they wanted this. These four are very different, but all bring something special to the ring.
It's great to see all of this talent getting opportunities. The wrestling business is a tough occupation. There are hundreds of independent wrestling organizations around the country and thousands of indy wrestlers. Making it to one of the big companies is the dream of all of them.
These four wrestlers were longtime RPro guys, too. They weren't just cameo appearances. While they all also wrestled elsewhere, these four all played major roles in RPro. All held titles. Skyler, Anthony and Sug were heavyweight champs and Pierce was a tag team champ as part of Body Magic.
This is all very exciting, but also cool was Jacques announcing that RPro was returning July 21. Notice I wrote "RPro." After transitioning to The Resistance, Jacques is bringing back the original RPro.
While that is a bit surprising, I think it's a good move. As Tommy and I have been discussing on The "Or Else" podcast, RPro was such a special place. There was a vibe and a feel to it that I haven't experienced anywhere else.
RPro will run exclusively out of Tampa, Florida. Unfortunately, that means I will not be attending shows. As much as I love RPro, I can't commute for their events.
Of course, I wish Jacques and RPro the best. I hope it is a major success. In fact, I hope it is so successful that he brings it back to Chicago at some point, even if just for a random show.
Despite being silent for almost a year, RPro is suddenly in the news. RPro alum are wrestling on television. RPro events are back. Things look good and I wish good luck to all.
Jacques promised more news coming soon. Obviously, the matches and other info will be announced. I'll be reporting all right here and on Patch.com. 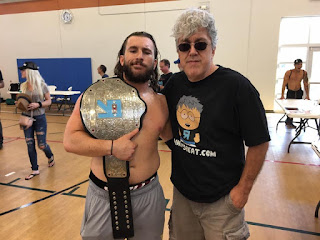 John Skyler and me in Summit, IL-September 2017.